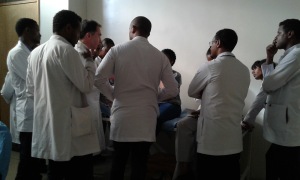 Holding Special Consultative Status with the United Nations ECOSOC, the highest status granted to an NGO by the UN, Global NeuroCare has engaged in a long-term collaborative partnership with Addis Abada University Department of Neurology to advance the training of physicians in Ethiopia. The Neurology Residency Training Program has been an outstanding success, substantially increasing the number of practicing neurologists in the country, leading to the treatment of more patients. These neurologists are also teaching a new generation of doctors to manage common neurological problems which represents the most effective was to improve healthcare in regions with a severe shortage of doctors and other healthcare providers.

On behalf of Global NeuroCare, Dr. Johnston and one of his Ethiopian colleagues Dr. Mehila Zebenigus have discussed the medical, ethical and legal aspects of advancing healthcare in developing regions at several meetings over the recent years including the United Nations High Level Political Forums, World Congresses for Medical Law and American Academy of Neurology conferences. They have highlighted the serious concerns of short term medical missions which fail to provide any substantive benefit to the host nation, and may cause significant harm to the local population. An additional concern is that developing nations have inherently vulnerable populations that may be intentionally or unintentionally exploited by these types of brief self-serving medical missions.

Drs. Zebenigus and Johnston presented the Ethiopian model to demonstrate that effective capacity development requires increasing the recruitment, training and retention of medical staff, which mandates stable long-term collaborative North-South partnerships focused on establishing local training programs, staffed by local physicians, to address the particular local community needs. They recently published a white paper for the UN on this topic, and will be present those recommendations at the 26th Congress Meeting of the World Association for Medical Law.

A prominent neurologist and medical law specialist, Dr. James C. Johnston has been in private practice for nearly 30 years. In addition to his work as a neurologist, James C. Johnston, MD, JD, also serves as a partner with Global Neurology Consultants, where he is mostly concerned with improving health care quality and access in developing regions. To further this vision, Dr. Johnston founded Global Neurocare, a nonprofit organization dedicated to advancing patient care and increasing medical training and research in developing countries such as Ethiopia.

Neurologists are scarce and resources limited in these developing regions, resulting in the needless deaths of those suffering from neurological disorders every day. Global Neurocare was granted Special Consultative Status with the United Nations in 2013, the highest status granted to a non-governmental organization. The Economic and Social Council (ECOSOC) Committee at the United Nations looks at numerous applications to find non-governmental organizations that coincide with the aims and purposes of other United Nations programs.

Members of organizations granted Special Consultative Status are able to serve as UN delegates at sessions in various locations around the world. Global Neurocare’s status with the UN allows it to raise public awareness, implement international trade agreements, and provide expert analysis on relevant issues, among other benefits. Neurological disorders are recognized by the World Health Organization as one of the greatest threats to public health, and organizations such as Global Neurocare are poised to help with the crisis.

World Association for Medical Law Congress in Tokyo on 6-8 August 2019.

Non-communicable diseases (such as heart disease, stroke, cancer, diabetes) are collectively responsible for 7 out of 10 deaths in the world, 41 million people every year.  Many of these people die prematurely and the vast majority of these deaths are in the low income countries.  The World Health Organization considers non-communicable diseases to be one of the top ten global health threats.

The situation is even worse in the least developed nations that are facing a triple burden on ongoing infectious diseases, rapidly increasing non-communicable disease and the effects of globalization including accidents and injuries, compounded by a dearth of healthcare workers.

On behalf of Global NeuroCare® Drs. Johnston and Zebenigus published a written statement on improving healthcare as a strategy for poverty reduction at the UN 56th Commission for Social Development with specific recommendations for Member States to improve healthcare access.  Global NeuroCare® is a non-profit organization holding Special Consultative Status with the United Nations ECOSOC.  This allows Drs. Johnston and Zebenigus, as Directors of the NGO, to provide expert analysis on issues related to global health, make written and oral recommendation statements, and serve as UN Delegates at the United Nations sessions in New York, Geneva and Vienna.

Drs. James C. Johnston and Mehila Zebenigus reviewed their recommendations for improving healthcare in developing regions with leading international experts from over 40 countries at the 24th World Association for Medical Law Congress in Tel Aviv, Israel.  The WAML, in conjunction with the Israeli Ministry of Health and Tel Aviv University honored Dr. Johnston with the Inaugural Davies Award in Public Health.  Dr. Johnston dedicated the award to the Addis Ababa University Department of Neurology and donated the funds to Global NeuroCare.®

Drs. Johnston and Zebenigus have published another statement for the 57th Session of the UN Commission for Social Development addressing inequalities and challenges to social inclusion through advancing healthcare strategies.

They will also present these recommendations to the 25th  World Association for Medical Law Congress in Tokyo on 6-8 August 2019.

Medical Error Third Leading Cause of Death in the United States

Medical errors rank behind heart disease and cancer as the third leading cause of death in the United States (see BMJ 2016; 353:i2139), with over 250,000 deaths a year.  700 a day.  And despite tort reform, medical malpractice litigation will never entirely disappear.  It remains important for physicians to understand the elements of a malpractice claim not only to protect themselves but more importantly to improve patient care.

The most confusing aspect of a medical malpractice claim is the standard of care element, and this is further complicated by the increasing use of evidence-based guidelines (EBG) or practice guidelines.  In some countries, EBG provide the legal standard of care, while most common law countries such as UK, Australia and New Zealand place great reliance on guidelines but allow courts discretion in accepting them on a case by case basis.

In the United States, most courts allow testimony using EBG both for and against physicians.  Whether a particular guideline applies to a specific case is simply another argument for the expert witnesses with the jury deciding who to believe.  In most cases, the actual written EBG may not be admissible as an exhibit.  It would fall into the same category as learned treatises and medical journals – the witness can talk about it and be cross-examined, but the document itself is not admissible.  Some courts have adopted a more liberal approach by admitting EBG as demonstrative aids.  Regardless of which approach, a physician on trial for malpractice must recognize that although EBG are not sacrosanct, any deviation from the guideline represents a very powerful argument to the judge or jury.

Dr. James C. Johnston is one of the very few neurologists in the world that is also qualified in law, and licensed to practice both professions.  He wrote the comprehensive chapter on advancing a neurology malpractice claim in Preparing and Winning Medical Negligence Cases, Third Edition (http://www.jurispub.com/Neurology-Chapter-11-Preparing-And-Winning-Medical-Negligence-Cases-Third-Edition.html).

He has published a number of journal articles and book chapters on how neurologists can improve patient care and protect themselves from malpractice claims.  These publications include book chapters in multiple editions of the American College of Legal Medicine textbook Legal Medicine and Medical Ethics, the Medical Malpractice Survival Handbook, and the landmark three volume treatise Legal and Forensic Medicine.  Dr. Johnston has published peer-reviewed articles in Neurology Clinics, Journal of Child Neurology, Headache, Medical Law International, Journal of Legal Medicine, Medicine and Law, and a number of other journals. 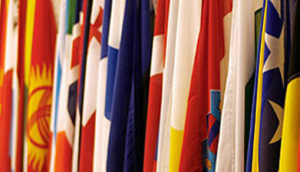 Disease outbreaks are no longer confined to small geographical areas, but have the potential to impact any region of the world due to an increasingly interconnected population combined with the dynamic nature of disease patterns.  This creates a global risk that must be managed through a coordinated approach in order to effectively control any type of epidemic.  The World Health Organization (WHO) promulgated International Health Regulations (IHR) to provide an overarching legal framework defining each nation’s duties in handling public health risks that are likely to cross borders.  The IHRs constitute a legal agreement among 194 nations.  These Regulations define when and how a country must report a disease outbreak to WHO, and highlight specific criteria for categorizing an outbreak as a “public health emergency of international concern,” which then triggers a very specific response.  Additionally, the Regulations contain provisions designed to protect the economy of a country that does declare an international emergency.  For example, these provisions preclude other nations from enacting travel or trade embargoes without a clear public health justification.  Neurologist and Attorney Dr. James C. Johnston is uniquely qualified to deal with the very specialized area of international medical law affecting health security.  He recently presented policy recommendations on these security matters to the United Nations High Level Political Forums on behalf of Global NeuroCare®, a non-government organization which holds Special Consultative Status with the United Nations ECOSOC.